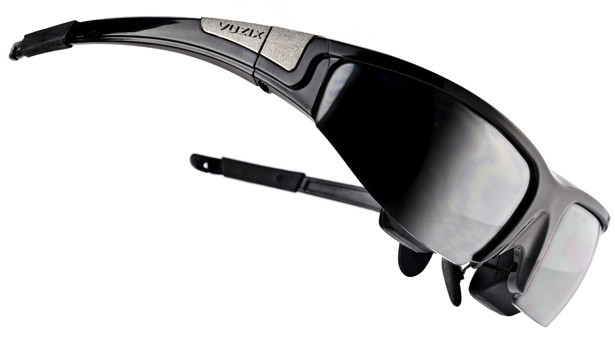 Vuzix is back with the latest version of its high-tech headgear.The new Wrap 1200 Video Eyewear connects to portable devices like phones to deliver a virtual 75″ 16:9 widescreen display for 2D and 3D content which the maker claims is the largest ever for a device like this.

It works with video as well as gaming content and is compatible with the iPod Touch, iPod Nano, and all mobile phones with video out (iPhone, Android, Nokia, etc.)

Users can also adjust the headset to find the optimum comfort and viewing angle as well as position the displays to match the wearer’s IPD (Interpupillary Distance or eye separation) allowing for optimum placement in front of each eye.

The Wrap 1200 is also wearable over most prescription glasses, features an adjustable hypoallergenic nosepiece and detachable premium quality noise-isolating stereo earphones and is powered by two AA batteries these provide up to three hours of video playback. Alternatively users can purchase a rechargeable Wrap PowerPak+ for added battery life.