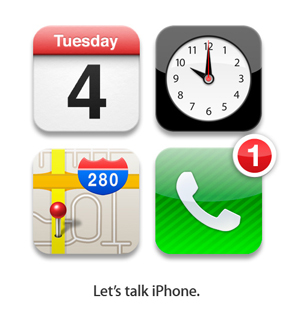 It seems that ever since the iPhone 4 was launched there have been all kinds of rumours about Apple’s next model, which we’re presuming will be called the iPhone 5.

Now an official date has been set aside for a ‘big iphone announcement’ making everything seem much more real (next Tuesday 4th October), we’ve collected together just a few of the things we’re expecting to happen, but if Apple ends up unveiling a wooden phone called iWood or something, don’t blame us.

Where and when will ‘it’ be announced?

The event, which so far has only been referred to as ‘let’s talk iPhone’, will take place at Apple’s Cupertino premises in California on Tuesday 4th October.

In London, MacRumours has revealed that the event will be streamed live to press at Apple’s Covent Garden store at around 6PM.

When will I be able to get my hands on ‘it’?

If the new product is unveiled on the 4th, chances are it’ll be available within a matter of weeks or even days if the rumours about Apple employees not being allowed to take holiday in mid October are anything to go by.

What will it be called?

Well firstly, its name isn’t set in stone, with some rumours suggesting the next model may be the 4GS instead of the 5, or possibly even both. Yes, TWO handsets.

When it comes to design most of what we know so far has come from the specifications drawn out by case manufacturers, but it’s hard to tell whether these are just mock ups based on pure speculation.

It’s been suggested that Apple has been experimenting with curved glass to create either the front or the back of the new device. I know plenty of fans out there will be happy with more of a tapered shape at the back like the 3GS, but I do actually like the more ‘blocky’ feel of the iPhone 4.

As other manufacturers like HTC experiment with bigger screens, it wouldn’t be surprising if Apple took the next model just a little bit bigger.

The home button has been discussed a lot in recent weeks, with many wondering whether it’ll be bigger, touch sensitive or even just scrapped altogether.

Everyone went CRAZY for the white iPhone 4 models, so we can expect both black and white handsets right from the word go.

Will it work differently?

So much focus has been placed on how it’ll look, everyone’s forgetting that its insides are pretty important too.

Many are guessing that the next iPhone device will have an A5 processor, like that in the iPad 2, which will make everything much more streamlined.

There have been lots of rumours about the iPhone 5’s new and improved camera after an image (allegedly taken using the device) was found on Flickr with an 8 megapixel resolution, which would be great news for mobile photography fans.

Following Google’s mobile payment launch, Google Wallet, we wouldn’t be surprised to find an NFC (near field communication) technology inside the next iPhone handset, but maybe that’s a bit of a leap.

So, we’re expecting something a little bigger, a little slimmer, possibly curvy, with a better camera and a faster processor. Now it’s just time to sit and wait…