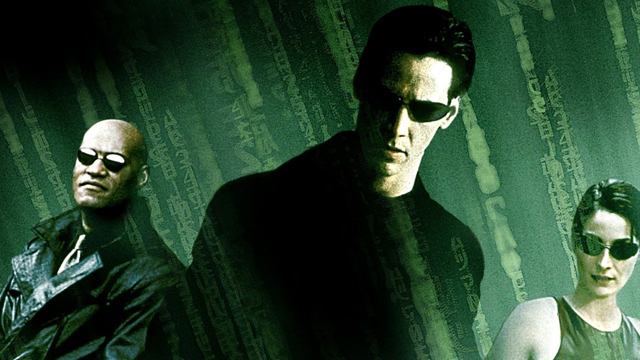 Our profiles are now timelines stretching back to the day we were born and in the next few weeks apps will be super sociable, allowing us to tell our friends EVERYTHING we’re doing ALL of the time.

1. The Final Cut
What happens in the film?
It’s set in a world where rich people are fitted with memory implants which record everything they’ve EVER done. Robin Williams plays a “cutter” who goes through people’s implants after they’ve died and creates a sickly sweet and succinct video for their grieving relatives.
How do we know Zuckerberg rented it out?
Because the memory implant is essentially what Facebook has become, a record of EVERYTHING you do dating back to the day you were born. Of course we can cherry pick what people see, but who knows whether there’s a “cutter” sat in Facebook HQ making a note of all the dubious things you’ve been doing…

2. The Matrix
What happens in the film?
A computer hacker discovers that the world he thought was real is actually a big computer programme he’s been plugged into called The Matrix.
How do we know Zuckerberg rented it out?
Because Facebook is slowly becoming everything to everyone. In the next few weeks you won’t really need to go outside of the platform for anything, from reading news to listening to music and we’re pretty sure this is how The Matrix would have started out.

3. Eternal Sunshine of the Spotless Mind
What happens in the film?
A couple undergo a kind of memory erasing therapy to try and forget one another.
How do we know Zuckerberg rented it out?
Because he clearly saw that forgetting people just doesn’t work in the long run and made the new Facebook timeline so every relationship you’ve ever had, hell even every conversation you’ve ever had, will be recorded FOREVER.
Thanks to @timwhitlock for this little tip.

4. Nineteen Eighty-Four
What happens in the film?
It’s based on George Orwell’s famous novel about a totalitarian society.
How do we know Zuckerberg rented it out?
Now we’re not comparing Mark to Big Brother here, but it does seem as if Facebook has been taking pointers from the Ministry of Truth, which controls all kinds of information in Oceania including news, education and the arts.

5. Memento
What happens in the film?
Leonard has anterograde amnesia which means he can’t make new memories after a particularly disturbing event and ends up getting REALLY confused, making a lot of mistakes and drawing tattoos all over himself in an attempt to remember important facts.
How do we know Zuckerberg rented it out?
The new timeline means that anyone going through a similar experience to Leonard can look back through what’s been going on to find out just who’s telling the truth about past events.