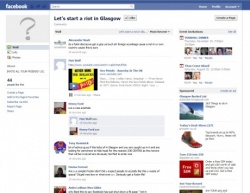 The police say yes, and have just arrested a 16-year-old in Glasgow for starting a public Facebook page called “Let’s Start a Riot in Glasgow”.

Nothing actually happened in Glasgow despite the posts from Alexander McQuarrie from Cessnock, though he was made to shut the page down. He has been charged with a Breach of the Peace.

Essentially we’re punishing people who are stupid here – stupid enough to publish something illegal – rather than people who have actually done anything. Do you agree with that?

And then, what about freedom of expression and all that? Could you charge rap music under the same laws?

One thought on “Poll: Should people be arrested for inciting violence on Twitter?”