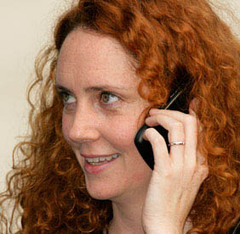 Twitter sure knows how to get the most out of a media scandal.

Tweeters have been at the forefront of the effort to punish News International for
using the social network to organise protests against it and to pressurize advertisers into withdrawing.

The Guardian uncovered the scandal, but it has been Twitter that got the indignant masses calling up advertisers and causing some to doubt whether the 127 year old paper can continue as an independent paper.

The users of Twitter were having none of the News International chief’s excuse that she was on holiday at the time of the Milly Dowler phone hacking, and thus was unaware of what was going on. So they made a hashtag.

#rebekahbrooksexcuses is now trending and there are some real corkers in there. We particularly like:

RT: @puritymatt Just because I authorised it and signed off payments for it, doesn’t mean I actually knew there was hacking going on #rebekahbrooksexcuses

RT @eoinmcdon: They said they left me a message but it appears my voicemail was hacked. #RebekahBrooksExcuses

Sure they get a bit surreal – that’s Twitter for you:

RT @samfromstroud I was hiding in a large house next to an army base in Abbotobad with two of my wives at the time.” #rebekahbrooksexcuses

RT @Annabel_Giles: I was the lead singer in Simply Red at the time #rebekahbrooksexcuses

And cynical:
It’s funny that anyone thought that any journalist had any integrity anyway #rebekahbrooksexcuses #wasteofyourtime #stopbeingdull

One thought on “Twitter takes on News International Chief over phone hacking: #RebekahBrookExcuses trends, is hilarious”