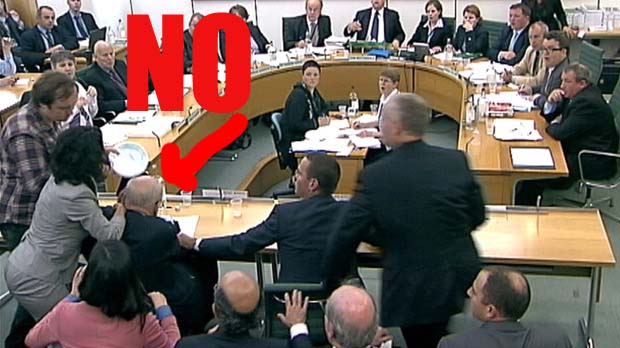 I feel the same way about LulzSec hacking the Sun as I do about that pie terrorist Jonnie Marbles putting some cream in Rupert Murdoch’s face in front of the Parliamentary Committee this afternoon.

Stop it and leave it to Parliament now.

Look – the ill-doing has been masterfully exposed (by the Guardian) and we’re now dealing with the consequences: Rupert Murdoch, The Sun, the British Tabloid press are in deep shit. Journalism in Britain will probably never be the same again. Criminal proceedings are underway

These guys are down. Authorities in 2 countries are

We don’t need them to be victimised by silly teenagers making lols who turn these powerful ball-breakers into poor victims. Now everyone’s like “aw, poor old Rupert Murdoch” & “isn’t his wife Wendi like a ninja” – and it’s really counter-productive because it distracts from the actual problem.

The LulzSec hack of the Sun Online was timed to get maximum attention coming just the night before Rupert Murdoch faced the UK Parliament. They diverted traffic to the Sun to a mock-up site they’d made with a front-page splash about how Murdoch had committed suicide through a gruesome drugs overdose. Then they splurged the phone numbers, email addresses and passwords of Sun employees all over Twitter. It got the hacking group a lot of attention. Just like the young pie comedian Jonnie Marbles or Jonathan May-Bowles who has probably got more attention now than he ever will have in his life, again. Anyway.

The hacking group who claimed responsibility for attacks on the CIA and Sony claim to have some high-faluting goals about press freedom and freedom of information which I applaud, but I don’t see them in action in stuff like this.

These guys are already in the mud. They’re caught. Go for the ones who haven’t yet been caught, the governments or media barons who are still flaunting their control – in Britain, America, the Middle East, China? Or just the Daily Mail? eh?

But that’s exactly the point. LulzSec’s decision to hack-and-attack comes on opaque criteria. There is no democracy or law which decides what or who their next target will be. It’s currently a bit more mob violence than Robin Hood. At least Robin Hood had some kind of “rob the rich” principle going on and a purpose for it – “to feed the poor”.

Go for big boys who haven’t been done yet, or work with investigators like Wikileaks to work out to free hidden information. These sort of stunts – and releasing the personal information of Sun employees is too vigilante, and is getting in the way

I say this because I like LulzSec and I like what I think they stand for. But they need a bit more coherence. And no pies. No pies anywhere.