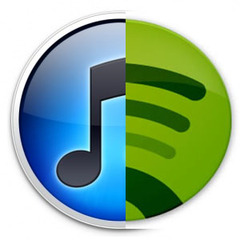 Spotify, the award-winning music service from Sweden has finally broken into the US market after years of negotiation with record labels.

Will their subscription-based model topple the Apple iTunes? I think Apple should be getting worried.

Though Apple first broke a psychological boundary by getting music fans to pay for something virtual – a file rather than a CD; Spotify have taken the process to its natural conclusion and realised that we don’t even need to pay for the file.

All we want is access to the file. The end user just wants to listen to as much music as cheaply as possible. Spotify realised that. And delivers it. Letting you listen to any of 13million tracks for £9.99 a month, a deal which kind of beats Apple’s 99p a track proposition.

We just need that file for the 3 minutes we’re listening to it.

I know it means I don’t own the tracks like I would with iTunes. But you know what? I don’t really care. I can buy a CD off Amazon if I really want something. And the playlists function is fantastic.

There’s been huge demand for a service like this for a while, but Spotify are the first to have done it so well: with almost flawless technology and enough legal muscle to get the labels on board.