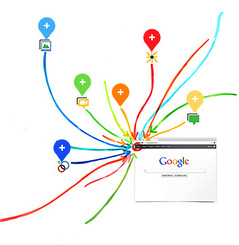 It’s a common complaint against Facebook that it mushes all your friends in together. The guy you met on holiday, your mum, that girl from school. “How do you know they’re your real friends?” is a question that people not on Facebook always ask about Facebook.

But though I’m so used to brushing that argument off- “it doesn’t matter”/”it doesn’t stop your real friends being your friends” there is some point to it. Facebook makes no distinction between your best friends and that randomer from school. Okay, you can have friend lists – same way you can have lists in Twitter, but they’re not very intuitive to use and are kind of fiddly. They’re not built into the core of the network and – correct me – but I think most people don’t use them.

“You share different things with different people. So sharing the right stuff with the right people shouldn’t be a hassle. Circles makes it easy to put your friends from Saturday night in one circle, your parents in another, and your boss in a circle by himself – just like real life.”

The boss is always in a circle by himself.

Hangouts is Google Plus’s version of Facbook Places and take the location and serendipity element and tries to encourage serendipitous meet-ups.

The Instant Upload feature is well, about instantly uploading photos and media.

Sparks is kind of content pusher – cherrypicking stuff from the web and sending it to you depending on your interests.

See more on Google Plus

One thought on “Where Google+ beats Facebook: Friend sorting”