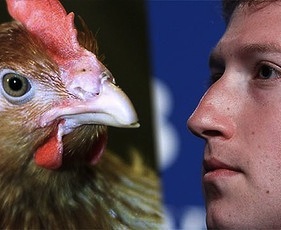 Literally so, that is – Mark Zuckerberg has revealed how he will only eat meat from animals that he himself have killed.

Jamie Oliver may be pleased to hear how Zuckerberg is raising consciousness about where we get our meat from – after all those school children are having all that trouble making the connection between a chicken nugget and a real live hen. Zuckerberg is no longer having this problem, having personally overseen the demise of chickens, goats, pigs and lobsters.

As the news spread, some people were confused to hear of the blood-thirst of the young social media king, so Zuckerberg sent an email to Fortune to explain how each year he sets himself a challenge, this being the latest. (Previous achievements: wearing a tie every day for a year, spending an hour each day learning Mandarin.)

“This year, my personal challenge is around being thankful for the food I have to eat. I think many people forget that a living being has to die for you to eat meat, so my goal revolves around not letting myself forget that and being thankful for what I have. This year I’ve basically become a vegetarian since the only meat I’m eating is from animals I’ve killed myself. So far, this has been a good experience. I’m eating a lot healthier foods and I’ve learned a lot about sustainable farming and raising of animals.”

This causes some problems when going out to restaurants, granted, but instead of marching into the kitchen demanding to know where they keep the cleavers, Zuckerberg says he mostly stays veggie under those circumstances.