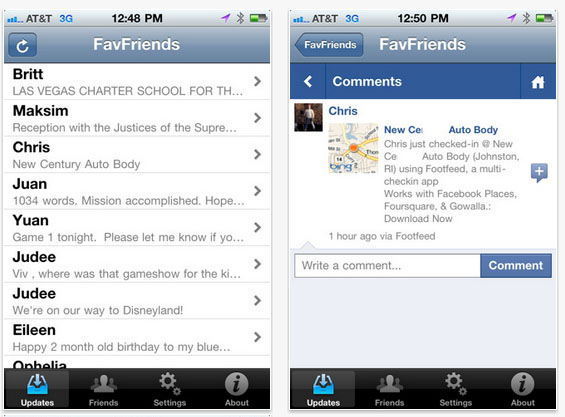 It’s hard to make a better app for Facebook than Facebook have – so Adrenaline Apps haven’t tried to, but they have made a different one. FavFriends for Facebook is an iPhone app that makes Facebook on mobile a different experience.

The FavFriends app does two things: it cuts down your friends to the ones you say you’re interested in and then actively pushes you information about them, especially location information. You can select up to 30 friends that you care about most and FavFriends sends you push notifications when they do anything.

It’s more selective – but also more hyper: expect your iPhone to be buzzing.

With a big focus on Facebook check-ins and Places – FavFriends aims to make Places more useful. Take a common scenario – your friend checks into a pub next to you on a Saturday afternoon. You have no idea at the time because you aren’t signed into Facebook, but you do find out six hours later when you’ve both left.

It would be more useful to get a little notification whenever it happens. Then you could send them a text, meet up, whatever. It could increase those serendipitous meetings that Mark Zuckerberg has been encouraging us all to have.

Okay – the downside is obviously hyper notifications – and getting buzzed about your sister’s night out while you’re trying to sleep would be undesirable, so having the option to switch off notifications between certain times would be a really good idea.

App-makers Adrenaline Apps have toyed around with location before – with their friend-finder location app Where R U? which let you share location with others on the app, but looks like Fav Friends might take off where Where R U didn’t, because it’s building on friendship base on Facebook and on the existing culture of checking in.

Worth a spin if you fancy a more plugged-in, active Facebook experience.