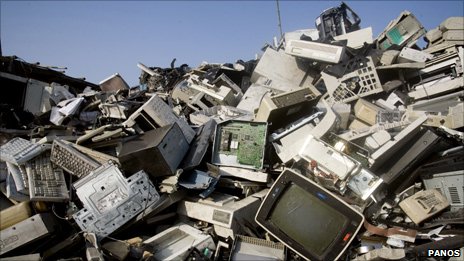 An interesting point popped up yesterday about TECHNOLOGY and SAVING THE WORLD – and how we’re not really doing it right.

Academic Michel Bauwens was talking to NetAudio London about digital music but he also dropped in a dig at the design gods like Apple and their strategies of planned obsolescence.

Planned obsolescence is why your iPhone battery goes after two years and you can’t replace it, but have to shell out for a whole new phone – which OMG has a front-facing camera. It’s when companies actually design their products to fail after a certain amount of time so you have to buy a new one. It’s a recognised design principle which most companies abide by.

Planned obsolescence has its supporters – who say it speeds up technological innovation, and its critics – who say it’s wasteful and often results in gimmicky innovations. Michel is a critic.

His point is that commercial design is wasteful and isn’t going to help us in a world of scare resources, so instead he advocated Open Design – at least for some things – the idea of products that we can continually tweak and build upon. It’s the Wikipedia approach to design – and of course it’s going to work better for some things than others.

Does it work as well? could you get a group of people collaboratively making a computer – or a chair – and constantly updating it?

I don’t know – but it reminded me of this: Creativity, Cost-Cutting & Keeping it Simple: what the Developing World can teach us about Technology