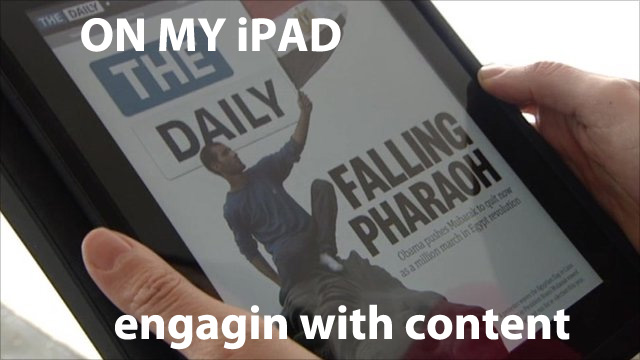 The latest statistics on iPad magazine engagement show that readers will spend 5 times longer looking at a magazine’s app than they will looking at its website.

That’s a significant increase in time. And a coup for the iPad mag supporters among us.

Developers TigerSpike who have made apps for the Telegraph and the Economist said that users spent approximately 20-30 minutes looking at the iPad app of a given magazine or paper, which was roughly five times longer than the 4-5 minutes they’d spend on the same magazine’s website (as calculated by PaidContent.)

I hate to say that I’m wrong about stuff, but maybe I wrote these little mag-apps off too early. I love the open web, but I’m starting, slowly to see some point in iPad magazines.

However, I’m sure the number of page impressions on the web will still be much higher than on iPad because more people will have PCs than iPads. I don’t think we’ll ever get to a stage where iPads outnumber normal computers.

But advertisers love engagement, so a committed iPad reading audience – even if it’s small – might be of great value to content creators.

I still maintain some qualms about these magazines though, because there’s also stuff like Flipboard, a beautifully presented RSS reader for iPad – which will whiz you together an automatic magazine out of your favourite blogs. And it’s free — and the content updates every time you refresh it.

And then, there were some gloomy sales figures around the end of last year..

I’m not totally sold yet.