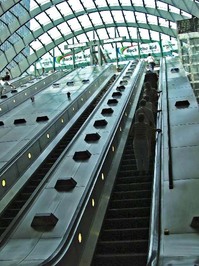 Yes, it’s true, some scientists did research on it and it got published in the Scientific American.

If you ask someone for charity donation at the top of an elevator, they’re more likely to give it to you than if you ask at the bottom research at the University of has just found. That’s because, scientists say – how we think and behave is heavily influenced by our surroundings.

Because we associate going up with good things – with nobility, with Heaven, with looking up to people you admire, going up something makes people behave in a more altruistic and noble way.

People were twice as likely to give to the Salvation Army if you asked them at the top of the escalator than at the bottom; they were more likely to be co-operative in a computer game if you showed them a video of a plane rising through the clouds just before than if you showed the video of the view through a car window. If taken up some stairs, they were more likely to volunteer more time than if you took them down some stairs.

As Prof David Schroeder writes:
“Overall these studies show remarkable consistency, linking height and different prosocial behaviors — i.e., donations, volunteering, compassion, and cooperation. While we may be inclined to think that our behaviors are the product of comprehensive thought processes, carefully weighing the pros and cons of alternatives, these results clearly show that this is not always the case.”

I’ve heard before that your surroundings have a big impact on how you behave. Not just obvious stuff like whether there’s a pneumatic drill outside the window, but also what the space is like you’re in – is the ceiling high or low? is it light or not? cluttered or clean?

I mean – I guess people knew this in the middle ages – churches always have awe-inspiring soaring ceilings, Houses of Parliament and other State buildings are designed to instill reverence and trust – with mammoth block and solid walls.

Not an April Fool’s I swear – check out the link below, it was posted yesterday.