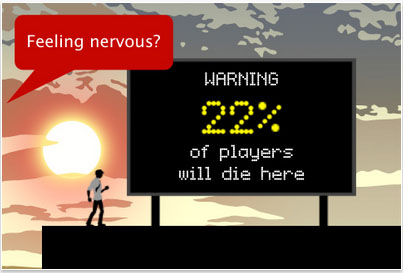 A game designer, fed up with the lack of fear and tension in the computer games he loves has decided to reintroduce an element of terror to gaming.

So Anthony O’Dempsey made a game where when you die, you really do die. Okay, sorry: you really do die in the game – not real life. In all other games out today, “game over” just means you go back two or three steps, or, at worst have to start again from the beginning.

When you fall in One Single Life – it’s game over and you can’t play the game again, because you’re dead.

Well of course, you can delete the app and re-download it, but by the rules of the game, that’s it.

The app, with it’s accompanying story of a young man trying to tell the truth about life and death has got a lot of attention in blogs. However there are a few critics in the comments sections, who think that existential pretensions don’t make for a great game experience:

“This game isn’t as deep as the developers seem to think it is. The only question I found myself asking is “why would anyone make this game?””

A commenter on the Wired article about it made a similar point:

“Simply disabling an application from future use isn’t really a game play mechanic, it seems more like a poorly thought out gimmick. Some sort of consequence in game should be used instead of punishing the user for playing your game. Seems like a lazy excuse for game design and poorly thought out.”

To me though, it makes sense, especially given the life-cycle of apps – usually not much more than a few days. Disposable apps that self-destruct after a few plays is a good idea, because, well, that’s all we usually do with them. As for the philosophical bit about human life, well, I love that stuff so I’m a bit of a sucker for this from the get-go…

One Single Life is free on iTunes

One thought on “The computer game where you really do die”