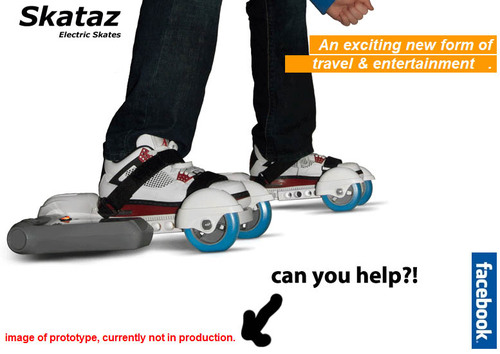 Um – we’re not saying this is a good use for your hard-earned savings, but we just want to tell you about it. This could be the investment that changes your life, and the way that the world moves around.

Forget those shit normal skates where you have to move your legs to propel yourself foward – Skataz – the electric skates will let you move *without* making any physical effort. Using an electric battery they power along and shoot you forward gracefully.

The sad thing is that these crazy geek devices are only a prototype at the minute and need both buyers and investors to err get them off the ground. Could it be you??

The site explains how the idea came to founder Ilya Kaganovich:

“Ilya Kaganovich began working on electric skates in 2007 when he thought of the idea while traveling in New York City as a way to get around town. Since then, he has built prototypes and worked with others to try to make it a reality.”

This particular iteration of the idea – Skataz – is slimmer and lighter than previous models. It would also come with its own battery backpack.