Last week the lovely people at Ford UK sent us to Courmayeur, Italy to test out their new C-Max on European roads. Here’s how it went. 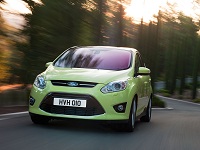 As a UK resident who learnt to drive on the right hand side of the road (steering wheel on the left please) I was excited about the prospects of finally driving again. Unlucky for me, we were met with a fleet of UK cars – I have never driven a UK car and wasn’t going to attempt it for the first time on European motorways, so I opted for the role of excellent co-driver and road sign reader extraordinaire.

En route through Switzerland and France – complete with the Mont Blanc tunnel – towards our destination of Courmayeur, a small picturesque village at the foot of the Italian Alps, I was impressed with the smooth, comfortable drive the Ford C-Max offered. Of course nothing had been spared: we had a fully decked Titanium ride in Mars red, complete with leather trim, heated front seats, built-in sat-nav, key-less driving, EcoBoost technology (that means improved fuel usage and lower CO2 emissions), a panorama roof (perfect for looking at the stunning Alpine peaks) and more dashboard buttons than a Boeing 747. The car was spacious, provided enough legroom, and clung to the road like a mountain goat to Alpine ridges. If this is the way a Ford car treats its owner, no wonder the Ford Focus was the best-selling new car in January*.

We arrived at Courmayeur as dusk was settling, and Craig – my driver for the day – and I ended up on an unplanned sightseeing trip around the town centre after missing the exit to the night’s lodging, the Hotel Auberge de la Maison. After a few more wrong turns we ended up ignoring the sat-nav that wanted us to stay in the town centre and instead trusted the printed guide left in the car by the Ford team. 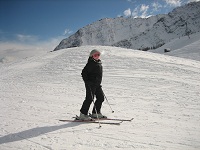 After a wonderful Italian feast the evening before, day two was mostly spent in the slopes as the rest of the world’s car enthusiasts and motor experts gathered for the Geneva Motor Show some 100 kilometres away. Set among some of the largest mountains in Europe, the Courmayeur Ski Resort offers spectacular views on a clear day and fantastic slopes to swoosh down. 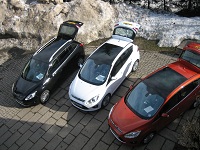 We left the glittering snow covered hills after a few hours to head back to the hotel in order to pack-up and prepare for the return journey to Geneva Airport – the nearest airport to the resort if you fancy heading there yourself.

The driving conditions were optimum and I even got to test the Bluetooth operated sound system and voice controlled phone call function before reaching the airport departure car park.

As I sat in the Business Lounge, munching on the complimentary gummy bears, I wondered how I would ever be able to go back to London buses and tubes after having been driven around for two days in such a high-tech car…

One thought on “The Ford C-Max European driving experience”