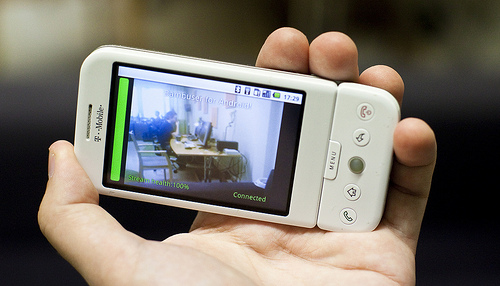 The live video streaming app holds the distinction of being the first web service to be banned by the Egyptian and Bahrain governments – before either Twitter or Facebook. CEO Hans Eriksson came over from Stockholm to talk us through Bambuser, a free video streaming app and how it helped democracy in the Middle East and how it could change your Facebook wall. Forever.

ONE: It will work on almost any device. 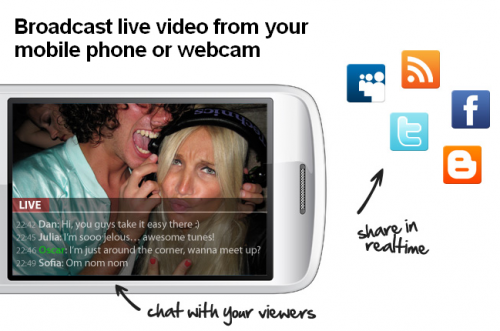 Bambuser is a free app that lets you stream live video from your phone to internet. It works from pretty much any smartphone and can stream to pretty much anywhere on the internet. Bambuser have apps for iPhone, Android, Symbian, Samsung’s Bada and Windows 7 is on its way.

The video you make can be streamed live to your Facebook profile, a Facebook page you own, Tumblr, Foursquare or you can grab an embed code and stick it on your blog or website. You can post out a link to the live stream on Twitter or via SMS.

You can also stream from your webcam to the internet. Pretty comprehensive.
Except for Blackberry – they had problems with the API.

TWO: It will work on bad connections 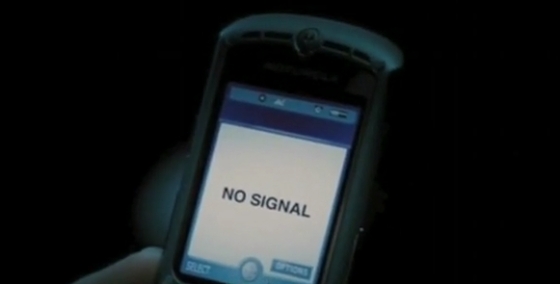 My first thought was: but the internet connection from my phone is shit – the streaming isn’t going to work. However while better connections make for for better broadcasts – this is where Bambuser gets smart.

Bambuser scales the quality of the broadcast to the strength of the connection. On fast connections it will push out high quality video at a full 35 frames per second, but on weaker connections it will drop frames but keep sending the video out resulting in jerkier but still continous broadcasting.

One particularly smart feature is a recognition of key frames. So Bambuser won’t drop just any frames when it’s cutting quality to save the broadcast – it will try and drop ones it thinks are less important while keeping ones – keyframes – that it recognises as more significant. For example when the picture changes noticeably it will recognise the first shot of a new image as a key frame and make sure that is kept in.

Other video streaming apps don’t have this capability.

All the videos you take and share are archived on your Bambuser account and a full quality video is saved to your phone. When you have finished your live broadcast, the app will actually go and replenish the frames it stripped out of the first broadcast so that a full quality video will end up on your blog or Facebook.

THREE: Interaction is built in 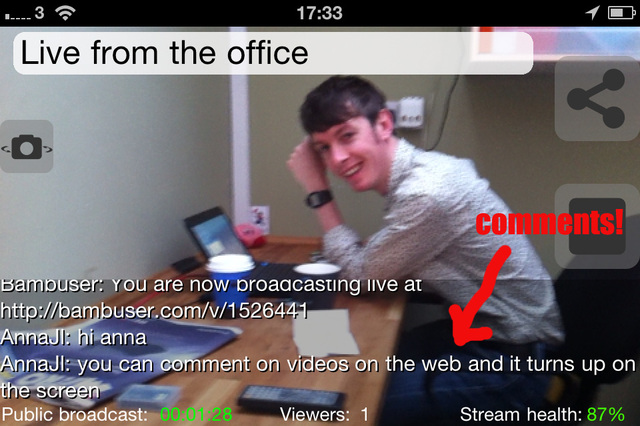 This – I like. People watching your live broadcast can comment on what they’re seeing and chat to you while you’re doing it – live. In the embeddable Bambuser video viewer there’s a chat box and anyone can chip in and comment.

Say you’re interviewing someone and streaming it live on Bambuser on your phone, viewers watching it on Facebook can tap in questions that will pop up on your phone and you can then read out.

HOW YOU CAN USE IT: 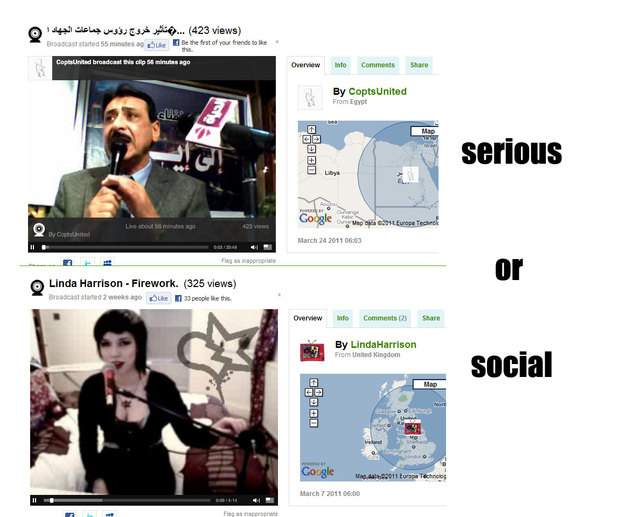 1) If you’re reporting on a live event as a journalist, bystander
You can stream out information in real-time. Previously if you wanted to broadcast live video you needed a TV crew and satellite connection. Now you just need your phone and this app.
Of course without Bambuser you could just save video of an event on your phone, run around the corner and upload it to facebook or twitter but: a) it’s not live: it gets uploaded after you’ve finished doing it; and b) it’s not interactive – you can’t see the interaction as you’re doing it live.
And, let’s imagine a disater scenario – your phone gets confiscated or the video deleted by the police, you won’t have lost your video because it will already have been uploaded and viewed on the internet.

2) For tooling around and sharing silly moments with your friends.
So say you’re not documenting police brutality in a repressive regime or reporting live from an earthquake zone, well. It’s kinda fun. It’s like a Skype you can share with more people. On a personal level the social interaction gets more interesting. You can stream out birthday parties, wedding speeches, and it’s not like a facebook album that comes out 2 weeks later – it’s more like an event because they can chip in and talk to you.

HOW BAMBUSER MAKE MONEY
Bambuser run ads on their consumer app – there’s a pre-roll advert and a little ticker tape at the bottom, buying a premium account will get rid of the ads for you and bring some other advantages like insights into your viewers.

They also have a commercial package for live broadcasters which they have sold to several media companies including the largest commercial broadcaster in Sweden and several Scandinavian newspapers. Hans predicts a big take-up from newspapers in the next 18 months.

DISADVANTAGES:
Data usage – apparently a 3min video, the average length of a Bambuser upload will take about 14-15MBs out of your data contract. It’s not something you could do everday if you are on a 100MB a month contract. Even those on 1GB contracts will probably have to watch how long they are recording.

Internet failure – if the internet is weak or goes down, this aint gonna work.. Often at busy events like protests, the 3G network is the first thing to go down.
Battery – again, as a practical tool both the data transfer and the filming will eat battery. So in a long-running situation it will take the battery out of your phone.

Oversharing – do we want unedited videos? will we get sick of the un-edited live streaming of reality?

Hello. This is great. Either as a tool of democracy, or a cute way to stream a video of your friend falling off a table to Facebook…

Of course it could result in lots of bad unconsidered, unedited videos – but that’s real-time for you. If you want edited video look at Youtube – or TV. The appeal of the real-time and social has been shown on Twitter, Bambuser brings real-time to video.

The social interaction is fantastic too: I love the idea of users being to influence what happens live as they watch a video – truly interactive TV.

If I had to pay for this we might be more critical of some features. If I ran a repressive government in North Africa we wouldn’t like it either.

But as it is – it’s a great tool and I’m sure uses will be found for this great new technology now it is widely available.