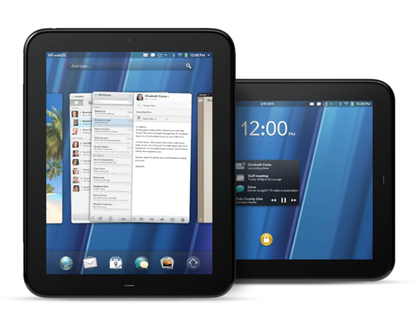 HP have bet a billion dollars on making their company more like Apple by creating software to go with their own computers. Earlier today they launched the TouchPad tablet running the web OS they bought from Palm last spring.

Here are ten things you need to know about it:

1) The new HP Touchpad will run the Palm patented Web OS, will have a 9.7 capacitive screen with tough Gorilla Glass. In size and weight it’s lining up directly to the 9.7 inch iPad.

2) More specs – the TouchPad has a dual core Qualcomm chip, at 1.2ghz, it’s more powerful than the iPad’s 1GHz. It has rounded corners and a bevelled edge. It has eight hours of battery life and a 1.3 megapixel front-facing camera plus GPS, stereo speakers, gyroscope and an accelerometer.

3) HP are the biggest computer manufacturers in the world. They planned to release a tablet before codenamed the Slate, but it has been officially dropped. The

4) Breaking with Microsoft Windows for their flagship mobile product is a big step for HP and a blow for Windows. However – their other tablet the Slate 500 is a Windows 7 device aimed more at the business professionals.

5) The TouchPad’s is based on the much praised and silky smooth webOS – originally patented by Palm. It uses a very graphical interface of cards which makes devices good at multitasking and intuitive to use. The webOS also integrates information very smoothly across different parts of the operating system.

6) HP’s move into making their own Operating Systems makes their business model more like Apple’s – where the hardware and software are made by the same company and are perfectly tuned together. Obviously the “making everything” model has worked well for Apple, but other companies like Nokia have struggled to make it work. Could go either way for HP.

7) The Palm name has been completely dropped, despite rumours that the tablet might have been called the PalmPad.

9) It will feature apps – from the 8,000 strong Palm store, however – it still lags far behind its Android and iPhone competitors.

10) The UK release date is September 2011, price to be confirmed. If it can significantly undercut the iPad then it has a good chance of selling well, but if it falls in the same price bracket then it’s likely to take a hit from iPad 2.