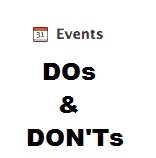 I remember when I used to actually check Facebook events, and be excited when I received one.

Now I get about five event invitations a day and they’re all useless. They go like this: Coco invites you to “BoomBoom”, John invites you to “My sponsored hamburger-eating session in aid of the Leicester Ice-Hockey team’s new stadium ” or Dolly invites you to “pasta-painting and politics”. Sigh.

I know, it’s partly my own fault for joining random groups over the years. (Why did I fan the page for my friend’s little brother’s club night back in 2009..?) but as an app, Events drives me crackers.

Despite having whip-smart personalisation elsewhere on the site – Facebook events is still a hot mess that requires a lot of spam-sifting to get to the good stuff. As a result the good stuff often gets left behind.

You have been warned. My tips:

Naming your event
Do: call it something straightforward and instantly understandable like “Jamie’s Houseparty”
Don’t: call it something obscure that revolves around an in-joke that only 5% of the guests would know and that only Bob remembers, “Breaking the door in” for example.
FOR GODSSAKE DON’T: call it the same thing as another real thing. This gets so confusing my head hurts. I know Kate & Prince William are unlikely to invite me to their wedding on Facebook but if you call your houseparty “The Royal Wedding” it just short-circuits my brain, my central nervous system flashes up a big 404 sign and I start panic-closing browser tabs. It’s bad.

What picture to use:
Do: use a picture, perhaps one that is relevant or pleasing to look at.
Don’t: be gratuituously offensive. Don’t use a picture of Prince William when it’s not about Prince William.
FOR GODSSAKE DON’T: leave the picture thing blank. You look like spam, I’ll never click on it, and I’ll miss your birthday party even though you are my best friend.

How to describe your event
Do: say what’s going on and why. Stick in a joke sure, but just one. That’s enough.
Don’t: do it all in the style of a. This is embarrassing for you and hard to understand for reader seeking information.
FOR GODSSAKE DON’T: write LOL

Final word of warning:
Is what you are organising actually an *event*? Check this before touching anything on Facebook. Have you lost your phone and want peoples’ numbers. THAT’S NOT AN EVENT. Do you want to generally gather sympathy for a political cause? THAT’S NOT AN EVENT EITHER.