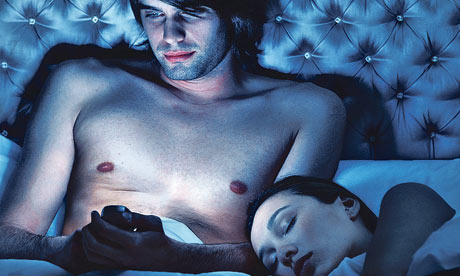 It seems us Brits really are happiest getting into bed with a Blackberry or choosing to snuggle up with a smartphone.

Perhaps heartening news coming up to Valentines Day – forget the boyfriend/girfriend, just buy an iPad. That’s what we all want deep down. Anyway according to some research by vouchercodes.co.uk

> 49% of men admit to playing games on their mobile phone while in bed with their partner.

> 33% of people would use their laptop in bed

So perhaps it’s not surprising that 14% of Brits believe that mobile phones, laptops, tablet devices and iPods should be banned from the bedroom.. though to be honest I think that’s a bit extreme. A ban on Angry Birds is fair enough, but banning laptops and iPods and smartphones – that’s just crazy. What are you supposed to do in there- just talk and read poetry?

But technology helps romance as well as getting in the way of it… The same survey also found that one in ten Brits have had a romantic relationship with someone they first met on Facebook.