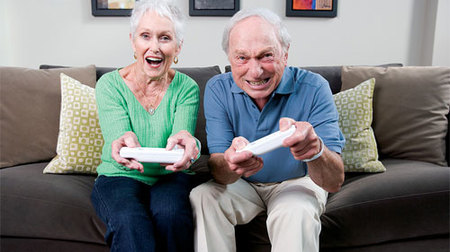 You’d have thought scented candles were more likely to have ended up in Granny’s Xmas stocking than an Xbox or the Nintendo Wii, but it seems that 1 out of 10 of us either have bought our grandparents a gaming console or are thinking of doing it this year, according to research by www.MyVoucherCodes.co.uk.

Consoles have been aimed at a youth market, but the benefits for the elderly are obvious. Games can keep your mind sharp while entertaining you and there can be a social element to multiplayer games.

But it also seems that oldies just want the games too. The survey asked those that said they would buy a games console for their grandparents to explain why. Here’s what they said:

Sounds reasonable to me.