Well we’ve all seen the tablets, the men in suits and the 3D dishwashers and suchlike – but CES has another side. A weirdy side.

A side where Hasssidic Jews set up marketing stalls and there is a peanut butter cupcake on a pedestal. We bring you three weird things from CES 2011. 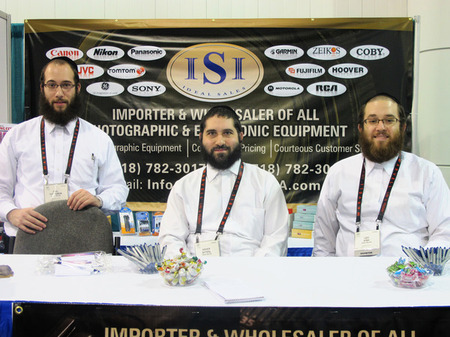 1) Hassidic Jews
Of course there’s nothing inherently weird about religious expression, it just comes across as funny in the midst of all those clean-cut techies. The large presence of Hassidic Jews is largely down to B&H Electronics – and is run on those principles.
“Ask how business is going..” the AP reported.. ” and you get this: ‘Baruch Hashem,’ or ‘Blessed be God’ – meaning, roughly, ‘Thanks to God, things are good.'”
[theatlantic.com]

2) Reese’s Minis
Unveiled on a spotlit pedestal to a drum roll, this small peanut-butter cupcake isn’t actually a piece of technology. But makers Reese say that much technical innovation has gone into making the cupcakes so small. They tell us: “Reese’s Minis reflect the best in creative product innovation and ‘on-the-go’ interfacing with user taste buds. And they solve an important issue for techies, too – their size and unwrapped state makes them ergonomically perfect for one-handed internet surfing or texting.”
[via chipchick] 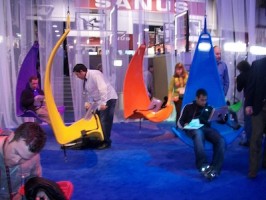 3) Hanging iPad Chairs.
See that picture above, that’s what we’re talking about. The chairs hang from the ceiling and have little bendable arm with an iPad dock on them. I think that’s weird.
[via inquistr]

So there are some weird sideshows at CES. But then again, most corporate presentations are pretty weird too if this account of Samsung’s keynote is anything to go by…

“4:12PM Oh, and we found a box of popcorn on our seats — it’s green and marked ZOLL. No, we have no idea what that means.
4:29PM The screens are now an undulating blue cube field. And man — are they ever undulating.”
etcera etera from Engadget‘s live coverage

Hey this is the tech industry, I guess most of us just are kinda weird.

One thought on “The other side of CES: PeanutButter cupcakes and Hassidic Jews”