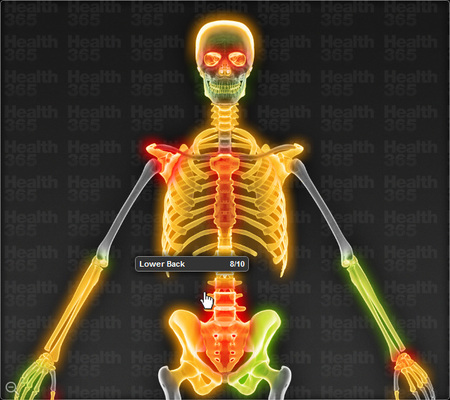 From the maker of the UKSnow map, comes a new map – one that maps the aches and pains of the human body. Developed by Ben Marsh, it is described as a “social media health experiment”.

Hoping to work out what parts of our bodes we hurt most, and what injuries cause us the most pain, Ouch365 is visual representation of a human body that colours according to what people tweet about pain.

It works on the same principle as the UKSnow web app – you include a hashtag, which brings your tweet to the attention of the app and then add the body part (left eye/right knee/lower back) and the level of pain from 1 to 10.

“There’s plenty of data out there on hospital appointments and trips to the docs, but we wanted to run a fun Twitter experiment to see which part of the body causes us the biggest Ouch! moment.”

.[known as pain to the rest of us]

“To join in our Twitter experiment, the next time you fall victim to an Ouch! moment, Tweet the body part plus the level of pain (1 = light ouch, 10 = big OUCH!) and use the hashtag #ouch365.”

It’s part of Health Insurance website 365Health – and presumably the result is as much publicity for the company as a genuine advancement in medical technology via Twitter. Still the results will be interesting, and the visualisation is pretty gorgeous.