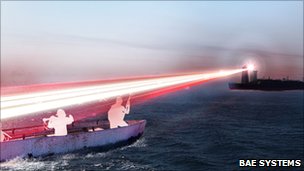 It sounds like a scene in a sci-fi film, but it’s acutally true. Weapons and defence company BAE systems are trialling a laser cannon for use against pirates. They intend it for use off the coast of East Africa where commercial ships are increasingly in danger of piracy and Somali pirates currently hold 586 people hostages.

The cannon is supposed to deter pirates in a non-lethal way, by firstly warning them that they have been spotted and then by temporarily blinding them at short range. The dazzling light would disorient pirates and prevent from effectively aiming weapons, BAE claim.

It all sounds like Dr Who, but the artist’s mock-up above looks more serious.

BAE need to do more human tests (where do they get the volunteers from?), but they claim the effects are similar to a pilot flying towards the sun and don’t cause lasting damage. It certainly sounds better than relying on armed guards and gunfights on the high seas. Especially since many of the ships in danger are oil tankers…