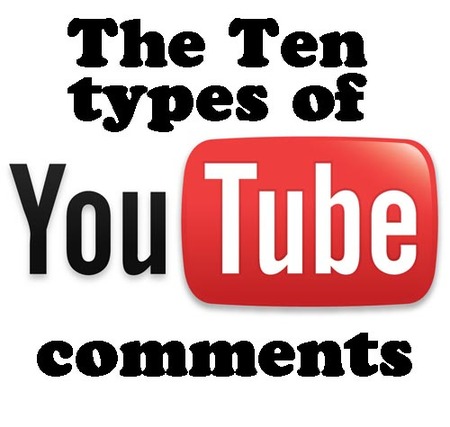 Youtube has practically invented the internet of Hate, or H8 as we like to call it over there. Youtube comments are dreadful but so compelling, and I miss them when I watch TV and there’s no-one calling anyone a douche.

If anyone wants to suggest that the internet is making us all into illiterate psychopaths, they usually quote from Youtube comments. But, still, I love them.

I reckon that the bulk of them could be put in ten categories:

1. The first sort is the “This is dumb/lame/you’re a douche” type, gold standard Youtube Hateor H8 depending on how you want to spell it. H8 comments are usually completely out of proportion to anything in the video, and will attack anything about anyone involved, including their birth, parentage, mental health and employment status.

2. The second sort of comments are ones that reply to the first sort of comment being like – “well if you hate it so much why did you watch it – you’re the one that’s dumb/lame/ a douche and your mum is.. etc”. These exchanges are endless because then the first person replies saying

3. Comments that commment on the Thumbs-Up/Thumbs-Down Button. Since Youtube introduced this thumbs-up, thumbs-down option for videos (a great idea) people have tended to comment on the numbers of people who like or dislike a given video. Usually, it’s fans of the video mouthing off about people who dislike it quoting the number of them and coupling it with some disparaging remark: “356 have never had sex” or “230 people like Justin Bieber”.

5. Comments about God. Like the Bieber ones, these get everywhere, see the Cornation Street/East Enders Children in Need collaboration for a fully-fledged argument about the existence of Satan.

6. Comments (usually about indie music) that display the commenter’s superior knowledge compared to everyone else, like “you dumb lame douche, they were on hiatus between March and December 2003. Or that simply the fact that they knew, a long time before anyone else, what was going on. I saw them in ’95, when they were still in preschool. Or something…

7. The ones you can’t understand because they are so badly spelt they are incomprehensible.

8. The ones that are about the commenter’s genitalia and are usually marked as spam. See tubecomments.

9. LOL or OMG. Many just use one of these two simple acronyms.

10. The genuinely useful comments and/or funny, that link to something or make a good point. YES THEY EXIST.