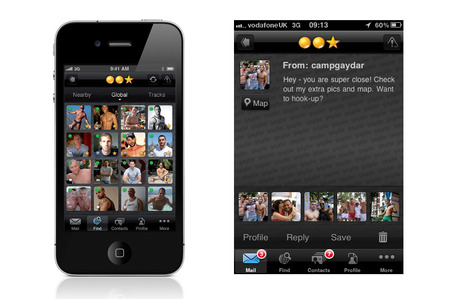 Pioneering gay dating site Gaydar has finally released an app for iPhone and it has leapt into the top forty social networking apps on iTunes in 48hrs.

The dating network for men launched in 1999 and has 6 million members worldwide.

However, it may be too late into the dating app arena to unseat its younger rival app Grindr, which is still steady at number 13 in the social networking app rankings.

The Gaydar app imports profile information over the website, letting you access messages, friends and favourites and search. Like apps Grindr, or LoveStruck (for straight people) it uses a location element in its dating too.

“Revolutionary dual ‘Nearby’ search displaying profiles of those logged into the app using LBS (Location Based Services) and online Gaydar profiles that have their GPS (Gaydar Positioning System) location set with postcodes or longitude and latitude.”

We’re not quite sure what’s revolutionary about this, but we’ll let it pass…

The big advantage over Grindr is the massive network of people already on the web version of the network, and depending on your perspective, the more sex-first, talk-about-cinema-later attitude on Gaydar.

One place where Grindr has the edge though is the price – it’s free. Gaydar carries over it’s paid-for membership thing from the website, so while the app is free, members who don’t pay – “Gaydar Guests” have limits on the number of messages they are able to send, a bit of a pain for those used to unlimited browsing.

Also instant chat – a staple of mobile dating – is not yet enabled on Gaydar. They better get that sorted quickly.

There are still gaps here – neither of these apps are on Android, Nokia or Blackberry – which cuts out a lot of people. And neither Grindr nor Gaydar have released a version for women… so Curshr Girls is only app which caters for lesbian dating on iPhone.