Microsoft threw down a challenge to the apps-based model of iPhone and Android by basing their new Operating System around Hubs and Tiles.

Windows Phone 7, launched yesterday, works around six hubs: People, Pictures, Office, Music, Video and Games Hub. Microsoft spokesman Aaron Woodhouse claimed that they make for a quicker and more integrated user experience that saves time because people aren’t having to go in and out of several different apps to do a single task – like sharing a picture on Facebook.

When designing the phone, Microsoft said they studied the tasks users did on their handsets and worked out how to make those journeys smoother. The three they focussed on were: sending email, integrated search and taking and sharing pictures.

Windows 7 had to do something to make up for its lack of apps – currently in the dozens rather than the hundred-thousands.. But Woodhouse said that by planning for user journeys and user experience like this, Microsoft had invented a more connected and intuitive phone.

You can see the focus on time saving in their new video advert.

Woodhouse explained:
1 Email – we want to be able to help people sort it, so it’s easy to delete or file. We have done some unique integration with mail and calendar – we don’t think the two things should be separate. You can send an “I’m late” message with a single button.

2 Integrated Search – Secondly, search works across apps as well as the web: Bing offers more than weblinks, will integrate with live data eg airline flight times or map search by keyword such as “pizza”.

3 Sharing Pictures – this is the third most common thing people do on phones – which is take pictures and share them. The integrated system which goes from photo review page straight to share options on networks like Facebook and is is quicker than a set of separate applications. 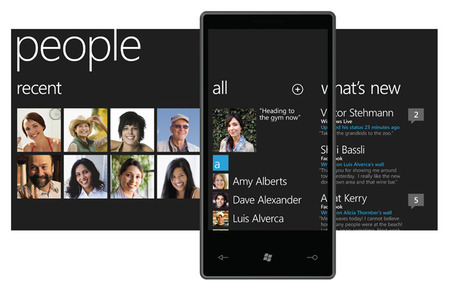 Quick notes on the hubs:
People with integrate your contact book with all of your phone – recents won’t just show you last calls, it will also let you see whose wall you last posted on, on Facebook. Pictures will automatically sync new shots with your PC when it detects a shared wifi connection and the Games Hub will integrate with the Xbox…