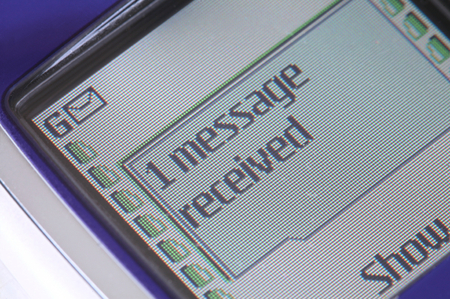 In fact they seem quite dull and 90s. However, let’s not underestimate them. I’ve had a couple of discussions recently with people who had a lot to say about text messages. And lets face it – I bet text is one of the most used functions of your phone, even if you’ve got a top-specced smartphone.

Here are two good reasons for a start:

1) Everyone who has a phone has text messages, that means you’re not just able to reach the 20% of the population with smartphones as you would with an app (and that’s not even going into the multiple platforms), you are reaching much closer to 100% of the population.

2) People check their text messages almost immediately. Do they check that eating out app they downloaded six months ago? No they are much less likely to.

One example of how people use text that I heard from a mobile phone journalist recently makes sound business sense. Apparently bars and restaurants who collect the phone numbers of regular customers and send out texts when there’s a two-for-one offer or when it’s quiz night, get a strong response. He writes about how business can use mobile phones and he suggested that text was a lot more successful than people realised.

It may seem tempting to get a branded app – and it could be useful to organise some stuff like pizza deliveries, but people are much more likely to check and respond to text messages. And while sending text messages costs money, it’s obviously cheaper than hiring a bunch of developers.

The other example I heard is from a small company which runs a piece of software that lets community groups organise over text messages. Called Frontline SMS it’s particularly good for work with more remote or disadvantaged groups because, guess what, everyone has got text messages where not everyone has apps. In crisis situations where action is required immediately, text messages are a much surer way of knowing that everyone will get your information.

Any other thoughts or other examples?

One thought on “Why We Shouldn't Underestimate the Text Message”