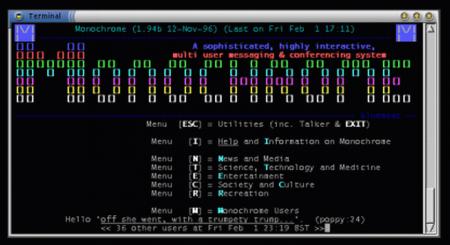 No, we’re not talking about MySpace or My_____ as we should refer to it these days. We’re talking about Monochrome, a social network born in 90s Britain which helped people keep in touch with each other online.

Inspired by film The Social Network I started having a chat with @absinthecity about pre-Facebook facebooks and she mentioned Monochrome as something she’d used back in the 90s – a UK based Facebook that could have been.

With strong parallels to the story of Zuckerberg and Facebook, Monochrome was set up by a student David Brownlee at City University in London as as a way to keep in touch with friends and spread among students as a way of communicating with each other. Brownlee was just a little bit ahead of Zuckerberg – Monochrome hit the web in 1990, where Facebook launched 14 years later in 2004.

There were profiles, live chat forums and users had “diaries” instead of notes, “meets” instead of events..And as you can probably see from the Monochrome screengrab above, the conversations happening on there were pretty similiar to what everyone talks about on Facebook these days.

Monochrome was built up on a Bulletin Board System (BBS) and is Wikipedia’s prime example of a BBS.

So uh, given the 14 year lead time, why aren’t we Monochroming rather than Facebooking each other these days? 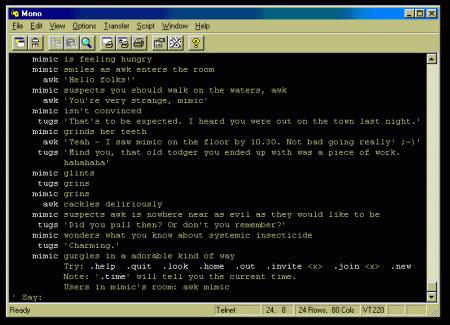 Well, its fatal flaw was perhaps being too techie. Most commands have to be inputted with square brackets. And where Facebook’s strapline is “Facebook helps you connect and share with the people in your life.” Monochrome goes a bit more high-brow…

“Welcome to Monochrome, a sophisticated, highly interactive, multi user messaging and conferencing system. You can send messages to other users logged on, leave messages for those who aren’t, participate in a wide range of discussions, and communicate in real time using a talker.”

I think they probably lost the average web browser at “sophisticated”.

Then there was also the little question of images. Monochrome was almost proudly text based, but when the use of images grew on the web, places where you could share pictures became a lot more attractive. Images are just a bit more immediately engaging.

The boards are still alive and well, though usership must have dipped down to a dedicated hardcore by now..

Still, if you watch the Social Network, just remember Britain had its own

NB: the Wikipedia article on Monochrome BBS has been deleted, but is available to be viewed here