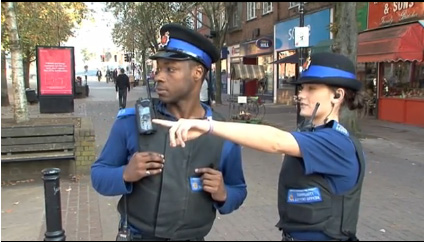 Because then we all get an insight into the crazy shit that goes on from the comfort of the Tweetdeck interface.

I am very pleased to say that several UK police forces have started tweeting about their daily activities. The Greater Manchester Police force are the torch bearers here with several of their local police forces tweeting on the following accounts: @gmp24_1, @gmp24_2 and @gmp24_3. Sadly this is just a 24hr exercise in public relations but we hope that it will become more widespread and regular.

Because it’s great! This the sort of stuff that would appear in the odd news section of a local paper, if local newspapers still existed/published news. Or perhaps the sort of stories that you’d hear from the local village gossip if you lived in a village and actually talked to your IRL neighbours.

Though most of the tweets are just a summary record of calls received:

Not thrilling in themsleves, but kind of interesting because they let you know what the police actually get up to in their offices and provide a kind of list of the incidents that make up the daily life of an area.

There’s quite a serious rationale behind it all too, Greater Manchester Police Chief Constable Fahy said on the website:

“Policing is often seen in very simple terms, with cops chasing robbers and locking them up. However the reality is that this accounts for only part of the work they have to deal with. A lot of what we do is dealing with social problems such as missing children, people with mental health problems and domestic abuse. Often these incidents can be incredibly complex and need a lot of time, resource and expertise. I am not saying that we shouldn’t deal with these types of incidents, far from it, but what I am saying is that this work is not recognised in league tables and measurements – yet is a huge part of what we do.”

Hope to see a lot more of this…