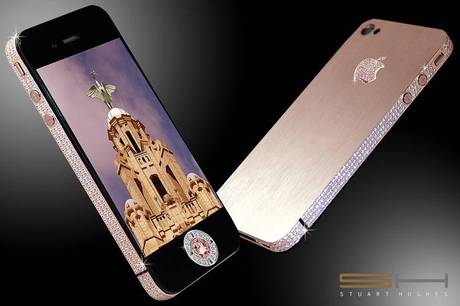 And there was me thinking that no-one would ever pay to get a gadget with a shelf-life of about 2 years covered in rose gold and 100carat diamonds.

How wrong I was. Tony Sage, an Australian who has made big money as a fund manager in the mining industries just commisioned Liverpool gadget-blinger Stuart Hughes to cover an iPhone 4 in gold in diamonds, according to an email from the jeweller.

And does it actually look that much better? Well it sure looks bling, but better is a matter of personal taste. The home button has been transformed into an amazing pink diamond nipple thing which looks almost rude in its decadence.

“The bezel is handmade from rose gold with approx 500 individual flawless diamonds which total over 100ct.The rear section is formed using rose gold with the added touch of its rose gold Apple logo and 53 diamonds. The main navigation is made from platinum which holds a single cut 7.4ct pink diamond. Also included (not shown in picture) is a rare 8ct single cut Flawless diamond which can replace the pink one.”

It comes with a convenient 7kg granite box if all the shining gets too much.

Stuart Hughes is famous for doing the most expensive gadget cases in the world – putting diamonds on TVs and platinum on Blackberries. I didn’t think anyone actually bought this stuff, but turns out they do…. He has actually

One thought on “Someone actually spends £5million on an iPhone”