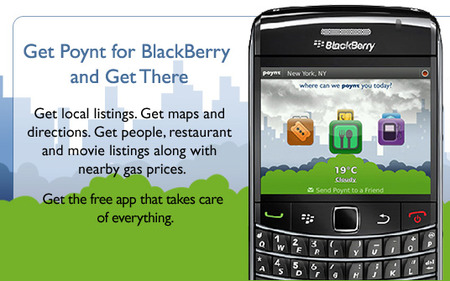 Poynt got in touch with us after we wrote this piece about how difficult it is to get location right on mobile. In the piece I complained that a lot of the services didn’t provide real reasons to keep using them..

Well, CEO of Poynt Andrew Osis has got several good reasons why you should use Poynt and why you should keep using it. If longevity is good sign in the tech world, these guys have everything in their favour, they’ve been tinkering around with location on mobile phones since 2002, using instant messenger queries to provide local information back in that dark time when apps weren’t even invented and people would have laughed at you if you said “iPhone”.

Anyway, in the packed market of location apps, what has Poynt got going for it? a focus on the USER according to Andrew [and those are his capitals]. And an awareness that services need to solve problems to be truly useful.

As he says: “the gaming aspect of checking in or notifying the world where you are is neat, but what problem does it solve?”.

From its background as a mobile yellowpages service, Poynt uses clean accurate information designed to people to businesses – giving you help when you need to know something about what’s around you quickly.

Poynt is currently on Blackberry and iPhone in the UK, Android in the next few weeks, and it will be rolling out to the rest of Europe shortly. It’s also coming to Windows 7 and Nokia.

We Interviewed CEO Andrew Osis over instant chat (how else), scroll down for the transcripts.

MOBILE LOCATION HISTORY – WHAT POYNT WAS LIKE IN 2002
[15:08:54] Anna Leach: what was your first product like? a text service?
Andrew Osis: the first product actually used a voice portal, then pushed back a wap session.
Andrew Osis: we found that voice recognition was terrible. still isnt very good today, then it was awful
Andrew Osis: so we actually transitioned to an IM front end, using mobile devices that connected through windows live messenger or yahoo messenger
[15:10:24] Andrew Osis: they could add a contact
[15:10:36] Andrew Osis: that would connect to our service,
[15:10:58] Andrew Osis: and perform look ups of yellow pages information through a natural language chat
[15:11:01] Andrew Osis: worked pretty well, but users didnt like it very much
[15:11:30] Anna Leach: ah why so? too techie for the mainstream?
[15:11:36] Andrew Osis: not sure, just didnt seem to catch on. people didnt think of search when they use IM
[15:12:22] Anna Leach: mm, fair enough, users are quite hard to train
[15:12:32] Andrew Osis: YES THEY ARE