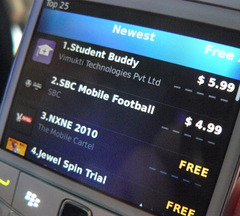 One way to sell more apps is to have great apps. The other way is to have a simple, easy to use app store. Much more than giving developers freebies, that is what phone-makers like RIM and Nokia should be focussing on.

Having a store front which is easy to use, simple to navigate, and perhaps attractive, goes a long way to getting people spending. Real world shops realised this a long time ago.

Apple have had a good app store from the beginning, most other platforms have lagged behind. Even if there are good apps, the process of getting them takes determination and every second spent footering around with menus just makes it less likely that someone is going to actually make a purchase. It actively discourages casual browsing.

The Android store is definitely serviceable, the Ovi is quite bad from my brief experiences and Blackberry’s store isn’t great either. It continues to surprise me how people I know with Nokias or Blackberries aren’t even aware that there are apps on their phones..

Makers of popular Blackberry app Widality explained on BusinessInsider how the problems they have had with Blackberry AppWorld actually discourages people from buying their apps:

“Customers can download a free version of Widality’s program, but if they like the tool and want to purchase the premium version, which has added features, they have to first uninstall the free program, download the premium version from a website, reload their data, and pay through a PayPal account–a complicated, time-consuming process that few people make it through.”

Yes, that would put me off too.
We have screen grabs of a few individual pages from app stores on here but it’s not just the layout of individual pages that is the problem, it’s about the user journey too – is it easy to follow? does it flow? is it intuitive?

Things like payment options tend to be a big stumbling block, which is probably why that is one of the first areas that Blackberry is addressing.. 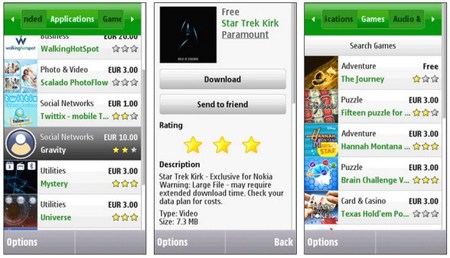 One thought on “Key to selling more apps – get a good app store: RIM learns the hard way”