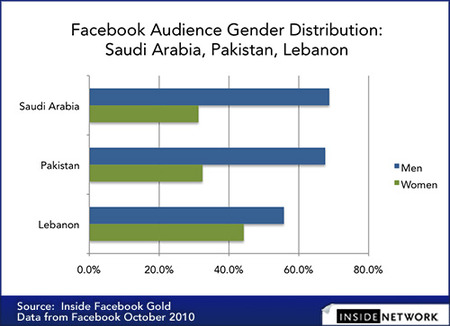 The general trend in Facebook membership is that the gender divide is just a squeak over 50-50 with the scales tipping in favour of women. 50.4% female to 49.6% male since you ask.

But some stats over on Inside Facebook show that that the gender divide gets majorly distorted when the site crosses over into the Muslim world. We can probably put that straight down to women being allowed less internet access and less training in how to use computers.

Asian Islamic countries like Indonesia are also more balanced than Middle Eastern ones. And Afghanistan and Iraq are among the most extreme cases.

Muslim countries are set to become Facebook’s biggest user bases – with Indonesia likely to overtake the UK as the second biggest market for the network sometime this year. Facebook exists even in countries where it is blocked – like Iran and Syria.