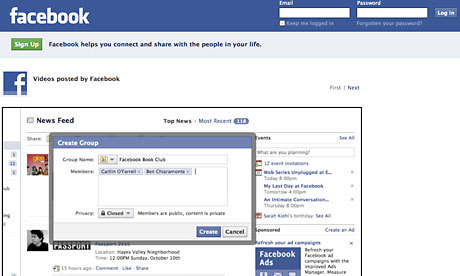 News that Facebook is introducing “Groups” may lead you to protest – “but I thought we already had Groups!”

But no Zuckerberg hasn’t finally cracked, he’s just using an old feature name to name a new feature that isn’t actually new either. Err, you see?

But hey! I hear you say, that already existed! It was called Friend Lists and let you designate certain people as limited profile friends who could only see a small amount of what you posted. But only 5% of the 500million users used it, so Zuckerberg thought the feature needed to be repackaged and resold as a valuable tool.

So in essence – no, not much has changed with this announcement, there’s no big new feature just a new name for a old feature. And the name isn’t that new because uh it was used for something else before… but anyway. You understand right? right……?

Facebook keeps getting more complicated – with more functionality, more features, more ways to share and more ways to control who you share with. Massive increases in membership and usage show that this hasn’t put people off. In fact a simple Facebook, called Facebook Lite, with slimmed-down features was withdrawn earlier this year because people just didn’t use it.

So no – it seems people don’t mind Facebook getting more complicated. We want it vast, complicated and full-fat. Even if many features tend to languish unused…

And Facebook wants to keep feeding more information into it – with the new Groups it will learn not just who our friends are, but who our close friends are too… Probably something useful for advertising purposes.