iPhone app Grindr ruffled a few feathers earlier this summer. The media picked up on the gay dating and hook-up app after Stephen Fry explained it to Jeremy Clarkson on Top Gear . It’s a simple but smart concept that uses GPS to work out how far away you are from the other people on the network. Would it ever for the straight market people asked? Do women want location based dating like that?

Well it seems one of those questions has been answered by the success of a Grindr for lesbians, Qrushr Girls. Turns out girls do like dating on mobile…. 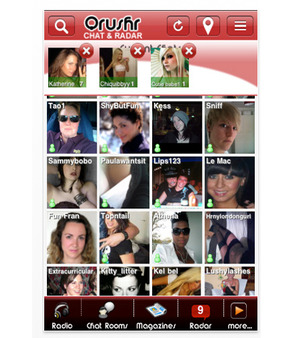 Let’s rewind and just explain what Grindr is again. It’s an app aimed at gay men looking for chat, dates or sexy times with other gay men nearby. Short profiles pop up with a picture, a line or two of description and a measurement in metres of how far away the other person is from you. It’s been phenomenally succeesful and just hit the million user mark.

Anyway its success has prompted questions about whether there’ll ever be a straight version of this – would no-frills location-based dating work for the straight market..? Do women date like this? At the time the Guardian’s Polly Vernon asks whether the app constituted ‘a new sexual revolution’ and Kate Baxter writing for shinyshiny asked if a straight version would ever be possible.

Well one question has at least been answered, women do seem to be fine using location based dating apps – there’s a lesbian equivalent of Grindr app called Qrushr Girls (different company, different app, same concept). Arguably they have just replicated Grindr model, with a few concessions to the ladies like forums and a link with an Australian magazine, but they have broken out a lesbian version before Grindr did so they seem to have cornered the market with 50,000 downloads since April when they launched.

Still I guess even though this app has women using it and potentially using it in a different way to men, Kate’s points about how straight world works still ring true and make it seem unlikely that a straight version would get off the ground…

“Because – rightly or wrongly” she says “- the way men and women operate when it comes to sex and relationships is (and perhaps always will be) poles apart. It’s instilled in us by society – unfortunately, the old double standards still exist.

“Men, straight or gay, who are looking solely for sex are normal, fun-loving and virile. Women looking solely for sex (so the thinking still unfortunately goes) must be easy, desperate or both. In this way, the Grindr model doesn’t work so easily in the heterosexual model – with two gay men, the power balance is much more equal than in a male-female connection, in which a set of preconceptions and presumptions will inevitably arise..”