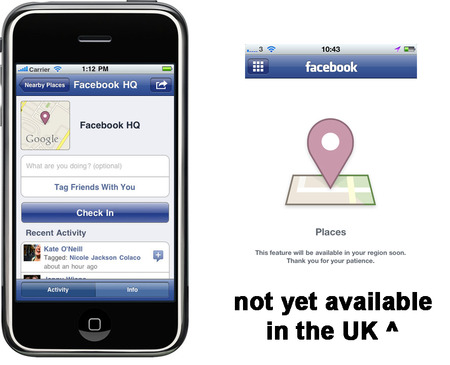 Just a little word on the Tweetvine – but it seems that Facebook’s Places is taking a while to get off the ground.

Launched to a hype storm in the middle of August the service lets you check in at places with your Facebook account. Just like check-in services Foursquare and Gowalla it works on smartphones and uses GPS to work out which venue you are in, then sends out a message to your social networks telling people where you are.

Mark Zuckerberg promised it would revolutionise how people meet and his vice president Christopher Cox said would change how humans record histoy. But despite the grand words, seems like American users have been slow to pick up on the service. Facebook Places isn’t even available in the UK yet, so no data from here, but some anecdotal evidence from the States shows it has had a pretty slow take-up.

We rang up Facebook to ask whether they had any official figures on the numbers of check-ins – they haven’t yet, so we’re just going on what we have (some observations from Americans) and that shows a low take-up.

Of course the function is still limited, the iPhone app is the only one to have Places embedded, other smartphone users can find it by pointing their browsers at touch.facebook.com – but that’s a slightly fiddly process, which probably cuts out a whole load of users. But given that we follow the technocrats on Twitter I’m surprised that this new functionality hasn’t been more widely adopted. And it’s not just the unfamiliarity with location-based stuff. Both our American tweeps noticed that check-ins with Foursquare – synced to Facebook – were on the increase.

Some observations from a couple of our American Tweeps:

from @a_copywriter – Still seeing lots of #Foursquare check ins but no #Facebook Place check ins. Is it not taking or is no one partaking?

from @shinyshiny – Facebook places isn’t enabled over here in the UK.. are people in the US not using it?

from @a_copywriter – I haven’t seen anyone use it. All the URLs I see are Foursquare. People are used to accessing it rather than Place.

from @softcity – hmmm… wonder if it has something to do with Facebook’s recent privacy issues. Could be 4square is just popular

from @a_copywriter – Could be, or maybe it’s because Places is only a mobile app and most people are using Facebook as a Web app?

Related: Facebook Places: What you Need to Know about Facebook’s new Location Feature