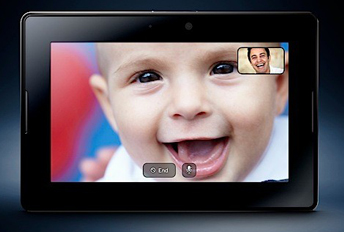 Blackberry’s new tablet computer, out in 2011, brings the technology behind the corporate darling phone to a 7inch screen. Soon execs on the communter trains will be whipping these out to quickly edit that document, draft up emails and flick through reports.

But why did makers RIM call it the PlayBook? it doesn’t sound exactly sound very executive does it? It sounds more fun and sort of naughty… and that marks a bit of a shift for Blackberry.

With the name, and with the advertising – check out the video chat with baby above (aw!) – Blackberry are reimagining their technology as emotional and pleasurable as well as just efficient. And there they’re moving into Apple’s territory.

Bigged up as an entertainment device, something to read your children stories from and as place for pictures of the dog – Apple’s iPad has always been heavy on the emotional appeal. Its seductive high res screen and very responsive touch capacity are integral to its popularity. It’s a sensual device. It’s a fondle slab as the journalists like to christen it… and it thrives off the warm “ooh” feeling that its very intuitive screen produces.

One thought on “It has baby videos too! Why the Blackberry PlayBook is chasing the iPad's gooey AW factor”