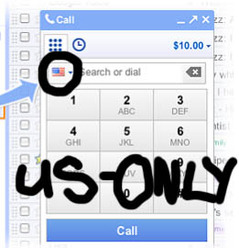 UK Gmail users got a notification last night saying that Gmail had just announced a new phone function letting you call US numbers for free… But turns out that Google voice chat wasn’t supposed to launch in the UK quite that quickly.

The clue was probably in the download thing not working. While gmail was egging me on to download it, it really didn’t work. I thought it was just me but Google have just withdrawn it and apologised for rolling it out to the UK before it was ready.

Soo… back to Skype while we’re all waiting then.

A spokesperson for Google said: “In our excitement to share voice calling, we got a little ahead of ourselves and, unintentionally, made it available for a brief time in some languages we don’t support yet. We’ve rolled back the feature, and apologize for any inconvenience. We launched it yesterday to US users and look forward to bringing localised versions to more people in the future.”

As I said this morning, I don’t think Gmail Voice Chat will take off.. Phone calls come to Gmail: three reasons it won’t bother Skype

More about Gmail voice chat on the Gmail blog

UPDATE: you can get it back by changing the language on your Gmail to US English. It still only calls US numbers though….