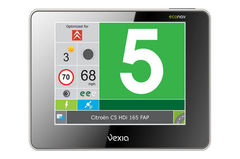 The irony with advice is that while everyone loves giving it, so few us are actually up for receiving it. No matter if it does make our lives easier, saves the planet or keep a few extra quid in our pocket, quite often we simply don’t want to know.

So the Vexia Econav, a clever new-ish product from a Spanish company claims to be the first to tell us how to drive more efficiently. I can’t help but inwardly groan a little. There are two ways of looking at this. One, that is is a genuine attempt by a progressive company to make a difference to consumers and the planet. Or two, that sat navs are all the same these days and too stand out a new company needs to have a bit of a hook.

Fortunately for the Vexia, I think it is more the former than the latter, but whether all this driving advice is going to work is another thing.

So I put the device in the car and fired it up. It locked on to the satellites quickly and presented me with a straightforward interface. It is is not perhaps as elegant as some of its rivals, but I got used to it pretty quickly. Overall the maps are clear and easy to follow and the turn by turn instructions clear and precise. There are some decent extra features too such as advanced lane guidance – which shows you which lanes you can use when coming to a turning – speed camera alerts and a healthy database of points of interest. As a basic sat nav this works fine.

What though of its driving features? Well the blurb is impressive. It claims to be able to reduce fuel consumption by up to 30% which means reducing CO2 emissions by up to one ton and also saving the user up to £400 per year. To do this though I have to change gear each time I am told (it calculates which is the best gear by analysing your car’s details and pairing it to the road you are driving on) and I am also prompted if I pull away too quickly or stop too suddenly.

The eco features clearly do work, but I think you have to be a certain type of person to live with them. Some people will relish being told when and where to change gear, others will reach straight for the off button.

The latest version of the Vexia’s software also has a speed nag built in. This tells you not only when you are breaking the speed limit but how many points you are likely to get on your licence. I wouldn’t say it was a useful feature, but the first time you use it does come as a bit of a shock to see how easy it would be lose your licence.

Overall the Vexia is a sound enough satellite navigation system. If those extra features appeal then it is well worth the additional money you’ll pay for it.