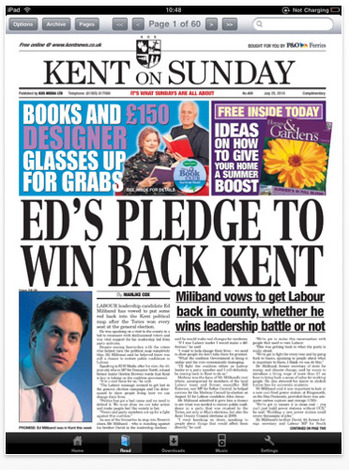 So it’s not just Wired and the FT that are getting iPad editions, Kent on Sunday has become the first British regional paper to make an edition specially for the glossy Apple tablet.

Perhaps, stories of how a Schoolgirl became the latest victim in a “tortoise theft racket” weren’t what Steve Jobs had in mind when he dubbed the iPad as a media device. But we can be sure that the picture of the tragically missing tortoise will be rendered in beautifully crisp definition on the iPad screen.

I suppose people in Kent are perhaps more likely to have iPads than other places in the country, what with the county being relatively affluent. It’s not a bad move for the publishers.

Thumbs up to Kent News for keeping up with the trends, however as we discussed in Why iPads won’t be the saviour of Magazines – media organisations shouldn’t be putting all their eggs in that glossy basket. God only knows what they should be doing… probably something with geolocated tweets and wikis, but I’ll leave that to greater minds than my own…