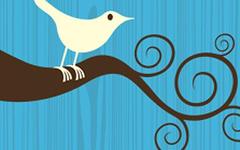 There has been a great deal of talk recently about how more and more tweets are people publishing links as opposed to people having conversations. This is reflected in the popularity of the iPad app Flipboard – which turns your tweets (or mainly your links) into a magazine style experience.

It also reminds me that the other day I read a tweet from a woman pointing out that one of the men she follows ‘doesn’t get Twitter’. His crime was to apparently tweet too many links. Not long after I read a tweet from a male friend who was unfollowing a women because he was sick of hearing about her fashion buys.

So it it very clear that people do have different expectations from micro blogging.

Some tweeps are mostly sharing what they are doing with their friends and having conversations with them about what’s going on in their lives. And then there are those who regard Twitter as one giant RSS feed; where all the smartest, and clued-up people share what they are reading and what they have written.
I then began thinking if perhaps all of the above was based on gender? Are women more conversational and men more link hungry? I decided to conduct my own little experiment and analysed the last 100 tweets of a selection of my female friends and the last 100 of my male friends. Who is linking and who is chatting? Obviously I didn’t include tweets from websites I follow.

Well I was quite surprised to discover that there was a bit of gender gap on Twitter. Of the last 100 tweets by men 54 of them included links to content, of which around 21% was content that had produced themselves. There were links to images and videos but most of the links were to news sources. There were some conversations going on, but in many instances these were ignited by a link.

The women I follow on Twitter delivered very different results. Just 26% of the tweets included links and of that 26% only about half was links to news sources. Nearly three quarters of the tweets were what you would describe as conversational.

I then looked at individual Twitter users too. As an example, let’s start with one female tweep who out of her past 50 tweets, 37 of which were based on conversation with others or sharing her thoughts on general day to day topics or observations. Only 13 of her tweets were to post links.

In contrast, my male tweep, posted 31 links with some tweets and re-tweets of other links that he found interesting or newsworthy. Only 19 tweets were interacting or chatting with others and the tone of these were definitely less engaging and personal.

The overall results were very similar in the sense that the content and tone differed. The men were frequently posting more links, with any conversation tweets being short and concise whereas the majority of female tweets were conversational and of a more chatty and personal tone.

Based on how I use Twitter and my mini experiment, I certainly think that gender is a strong factor in whether we are mostly chatting or posting links on Twitter.

So what do you think? Do the genders use Twitter in a different way? Or is it just that the people I follow are on a odd bunch?