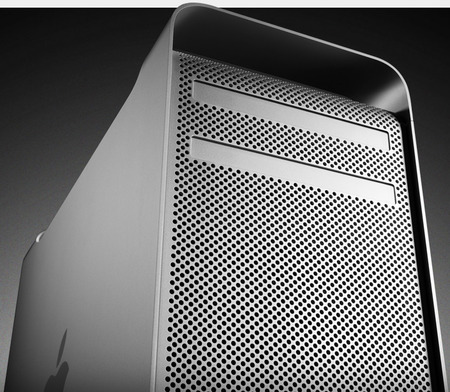 It’s a Mac Pro and it has 12 processing cores. Gulp. There’s not much more we can say. Dual core chips became industry standard a few months ago and significantly increased the processing power of the average laptop/desktop computer.

“The new Mac Pro is the most powerful and configurable Mac we’ve ever made,” said Philip Schiller, Apple’s senior vice president of Worldwide Product Marketing. “With up to 12 cores, the new Mac Pro outperforms our previous top-of-the-line system by up to 50 percent, and with over a billion possible configurations, our customers can create exactly the system they want.”

“At the heart of the new Mac Pro’s performance are next generation quad-core and 6-core Intel Xeon processors running at speeds up to 3.33 GHz. These multi-core processors use a single die design so each core can share up to 12MB L3 cache to improve efficiency while increasing processing speed. These systems feature an integrated memory controller for faster memory bandwidth and reduced memory latency; Turbo Boost to dynamically boost processor speeds up to 3.6 GHz; and Hyper-Threading to create up to 24 virtual cores.”

Yes, it sure is a lot of cores. They’ve also released a 27″ display screen and some other updates to their range. On the Apple site below: