Not everyone understands the internet and why should they? I mean I don’t really understand it either, I just know I like it.

The best thing though, is when people who don’t understand the internet at all complain about it in vague but threatening letters where they mention Hitler. A gem below: 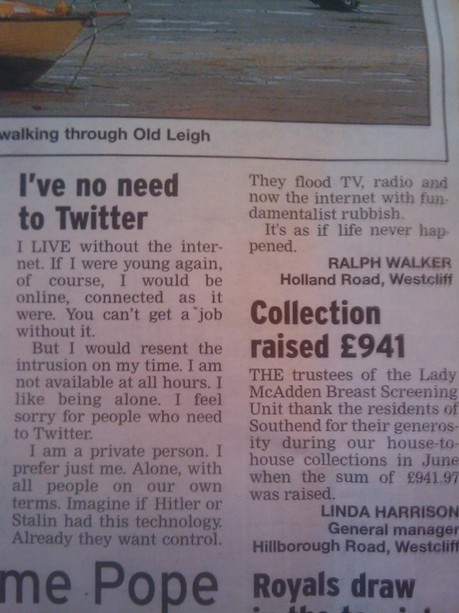 This guy’s smart enough to know why us young’uns do this stuff too (Twitter is good for jobs) – he is also not ashamed to annouce that he’s happy being alone, and that he thinks “they” are going to take control.

Best lines, apart from the bit about Hitler and Stalin, are:
“I feel sorry for people who need to Twitter.”
“It’s as if life never happened.”

I can’t tell what paper this was printed in, but I imagine something local to Westcliff in Essex. Full credit to @mattwhatsit for finding this little marvel and putting it on TwitPic.