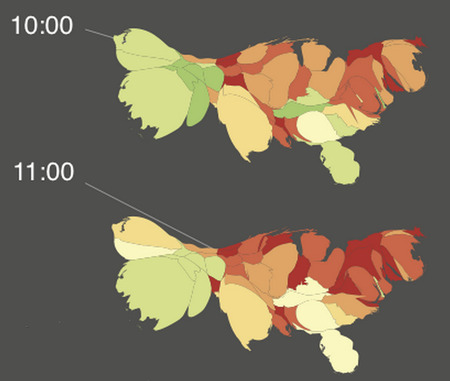 New Yorkers are a bit miserable, Florida is more cheerful and people are happier at night than midday. I love mood maps, we covered a UK one here a few months, and some research Computer Scientists in Boston have just made one for the States using Twitter.

Computer scientist Alan Mislove at Northeastern University in Boston has titled his findings “The Pulse of the Nation” and green colours on the chart represent happiness with red representing negative emotions. The geographical maps are distorted to represent the density of tweets in a data visualisation called cartograms.

Other findings from across a broader time period suggest that people are happiest on Sunday morning and most depressed on Thursday evening. Probably something to do with how much time you’ve spent in the office.

Where previous mood maps rely on people rating themselves as happy or not on a scale of one to five, consequently running on pretty small samples, this survey managed to use all geo-located tweets posted from America – that’s about 300million. Their software included a language filter which rates words as displaying positive or negative emotion: “funeral” for example is a negative word, while “diamond” gets

To be honest it doesn’t necessarily mean that New Yorkers are less happy, it could just be that they don’t like expressing it. And of course we can’t promise that Twitterers are fully representative of the population. I for one would imagine them to be happier. Most people on my tweet feed are real chirpy.