Windows Live Messenger has just released an app for instant messenging on iPhone. It’s free and it adapts lots of the computer-based features for mobile. As with the chat service, the features are better if you’ve got hotmail because the email and chat services integrate. 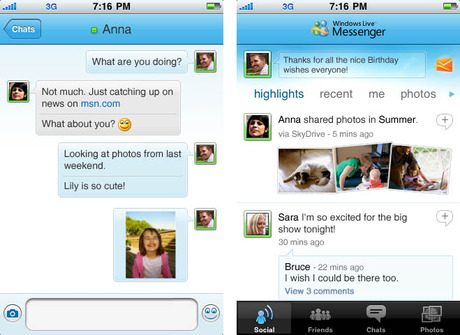 Currently the second most downloaded Free App in the social networking section of the App Store, it’s likely to be a big hit seeing as it will let people communicate for free and across platforms.

Previously named MSN messenger, Windows Live Messenger has a huge fan base as it comes with any PC running Windows. Apps channeling it into iPhone have been around for several years, but this is the first official app from Windows.

Features of the app include:
Instant Message with multiple friends, allowing users to view chat history, use emoticons, send a ‘nudge’ to a friend who isn’t responding, and share links and photos via Instant Message

Push notification of new chats, so users can see when they receive a new IM when they’re not already interacting with the app