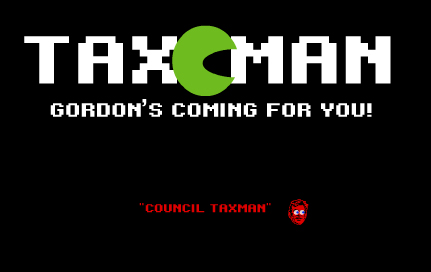 Here at Shiny Shiny we like to chew the fat and reflect on the past. Of course, by past we don’t actually mean The Past – like, before television was invented, but the digital past – 2007. When Twitter was barely a thing and Facebook was largely students and iPhone had only been in shops for a couple of months.

We unearthed this post from our archives, written in October 2007, it described the digital media strategies of the different parties revealing that believe it or not, there was a time when the Tories were far ahead of Labour and Lib Dems to the extent where they had actually created a retro Pacman-style game. In Gordon Taxman you trot along a little maze avoiding the red head of Gordon who tries to gobble you up. As they put it:
“The Aim of the Game is to make money while avoiding Taxman Gordon and his 111 stealth tax rises”
Regrettably it requires a joystick to play properly and it won’t be challenging Uncharted 2 for game awards any time soon.

Complete with retro styling, this is probably the strongest pitch to the hip geek market that I have seen the Tories make., though admittedly it’s light on policy details. The game was part of a social media push the parties made back when it look liked Gordon was going to call a snap election in 2007, but I regret to say they haven’t developed the idea this election, relying more on Twitter and er Facebook groups to get their message across.

I guess that is the key difference between now and 2007 is that social media has taken off. Back then online strategies were about blogs and email lists. Though I think there will always be a place for silly games in political campaigns.

So the Torys have Taxman Gordon, what games should the other political parties make?

Lib Dem – well this wouldn’t actually help inform people about their policies but I’d like to see the #nickcleggsfault twitter meme turned into a game. Sort of like tetris, you have to move falling pictures of global disasters so they fall on a picture of Nick Clegg.