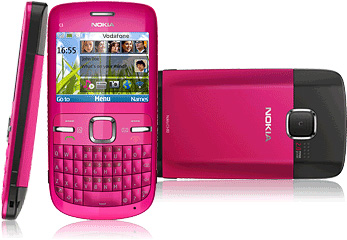 Nokia’s Blackberry-lookalike social-networking phone the C3 will be exclusively availalbe on a pay as you go deal with Vodafone. It’s a move that may encourage lots of customers with less money into smartphones.

When the Nokia C3 launches in June, Vodafone customers will be able to pick it up on one of the network’s pay as you go deals. Packing Nokia Messenger, the phone offers one-click access to social networks, email and instant messaging services including Ovi chat – all pretty cheaply on customisable pay as you go deals.

C3 customers will have to work out mobile internet deals, which on Vodafone include 250mb data web packs at £7.50 for 30 days.

I keep mentioning that I am not a fan of limited internet deals but limited internet is the nature of pay as you go, and if you juggle your budget right and watch your usage, this could be a cheap way of getting a nice smartphone.

As for the phone itself, the Nokia C3 also features a full QWERTY keyboard, Wi-Fi connectivity, a two-megapixel camera, capacity for up to 8GB of memory and a 2.4 inch screen.

It’s a cute little handset that comes in several colours, including pink if you’re wondering.

Nokia C3 out in June on Vodafone pay as you go, more info here.