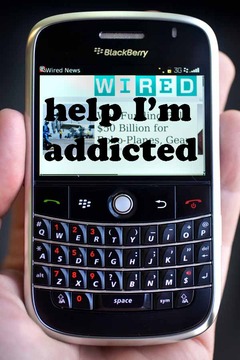 I know the way people call Blackberries “Crackberries” is a joke but there really is something about Blackberries that makes them extra special addictive.Research in 2006, did claim their impact was similar to hard drugs in the minds of their user.

Given that other phones are also great and also use push notification – Nokias, iPhones and Androids still don’t seem to have the same addiction quality. I mean no-one calls iPhones “Heroin-Phones” do they?

Why Blackberries are so addictive: five reasons..

1) Blackberries make noise by default and they push notify by default. It’s hard to switch either of those things off.

2) Blackberry Messenger – there are apps for this on iPhone, but Blackberry has had instant messaging built in from the start. IM your fellow Blackberry owners for free in this fast-paced ping-ping-a-go-go. It works whenever you and your friends’ Blackberries are on – which is like, all the time right?

3) Let’s not just examine the phone, the users are important too: Blackberry users are probably the sort who want to be pinged all the time. Probably if they don’t check their email for 10 minutes they’ll have lost out on a massive oil/property/lunch deal

4) Habit, if you start checking and sending email every 5 mins, people expect you to check and send email every 5 mins and start to think things are wrong if you haven’t responded in 10. It’s a hard habit to break.

5) Blackberry is a status symbol. Whatever other handset owners may think, Blackberries still say high-powered, serious business-person in-demand and Blackberry-owners like to flaunt that by taking it out and waving it around. Proof? there’s a facebook group called: “I have a BlackBerry, I’m out of your league”.

Any thoughts about why Blackberries are so addictive?