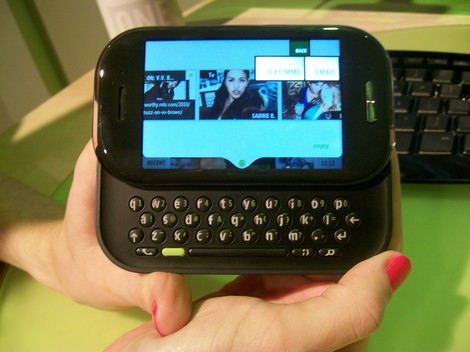 So it’s cute, it’s for social-networking youngsters and it’s going to be cheap. We were at the press unveiling in San Francisco today and had a play around with it. Here’s our verdict:

How it feels:
With rounded corners and solid-feeling slider keyboards both sets are palm-sized and nice to hold. The Kin One is a single hander – for texting with one hand; the higher-specced Kin Two is a more conventional rectangle.

How it looks:
The Kin One is getting some flak for its bubbly circular shape, with claims that it looks too kiddy or girly. That’s up to you to decide. I think it’s nice and user-friendly. Kin Two looks more conventional but is slightly smaller than the average smartphone.

What the user interface is like:
This is a social networking phone and your home page is a mash-up of social networking feeds (see The Loop below). Some people objected to the picture-heavy mosaic style screen that breaks out of the more familiar grid layout. It all looks more like a MySpace than your average phone home page. You could call more exciting or more confusing.
Navigation is pretty intuitive, with lots of dragging and dropping (see The Spot below).

1) The Loop – a feed from social networking sites, the Loop mashes up Twitter, Facebook, MySpace, whatever networks you want in a mosaic style page with pictures. This stream is your homepage and comes ahead of apps (swipe left to find the apps screen). It’s a real-time feed tweaked to prioritise updates from your favourite people rather than just everything.
Described by some as cluttered, the busy patchwork screen looks set to appeal to youngsters used to MySpace and Tumblr.

2) The Spot – this is, yes, a spot at the bottom centre of screen at all times. Described by the demonstrater as a kind of cart, or a clipboard – it’s a tool you use to share stuff with. Drag content from the Loop to the spot (a picture someone uploaded on Facebook say) and drop it in there. Then you slide over to your favourites screen, grab a friend you want to send the picture to, and drop your friend in the spot too. Click on the spot to see the content and people you want to send it to, then SMS or email it to them. You can simply repost other peoples’ stuff by posting it onto your twitter or facebook from the Spot too.

3) The Studio – The Studio is place on your computer where you can access stuff from your phone, solving that big problem, how do I get this stuff from my phone onto my computer. The Studio is a secure website you log into from anywhere, and it contains all the photos and videos you take on your phone. Photos or videos are automatically uploaded from the Kin to your Studio account over the internet (no cables or SD cards required) where they get organised on a timeline and on a map according to when and where you took them.

Good for:
1) Need I say it again? This is good for staying in contact with people over social networks. For SHARING. It filters updates down to ones from your favourite people so you don’t have to wade through random crap.
2) The Kin is also great for photographers – pictures on nights out are going to really benefit from having a decent flash, and the nice quality camera should produce good snaps.
3) Good if you get worried about losing your phone and losing all your stuff – pictures and vids are automatically backed up to the Studio site.

Downsides:
1) No app store!
2) It’s closer to a feature phone than a smartphone so don’t expect massive processing power or many high-level functions. I couldn’t see myself sending many work emails from this..
3) Would that much social networking drive you crazy? How many updates can you cope with in one day? It could also be distracting. If you want to check your email but are faced with Facebook everytime you switch your phone on, I can see productivity taking a hit.
4) People may laugh at you. That Kin One does look a little like some kid’s toy.

Conclusion
I love social-networking and I think Microsoft has been smart at working what this demographic want. If you use your phone for work a lot, I imagine you’d want something a bit more serious, but if your phone is for fun and friends and you haven’t got loads of cash to throw around, the Kin will be a treat.

Out in the UK on Vodafone in the autumn

Check out the pictures in gallery here

See also: The thinking behind the Microsoft Kin: what social-networkers want in a phone